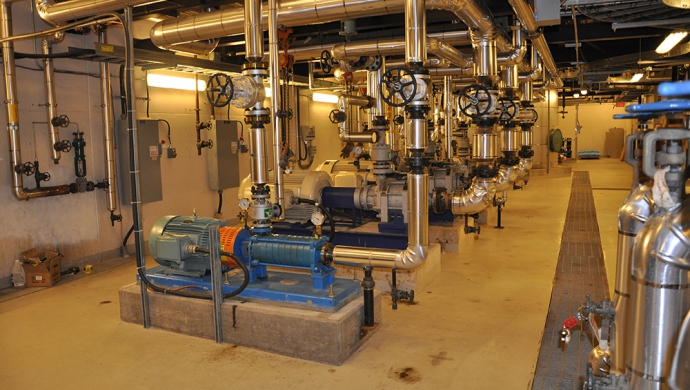 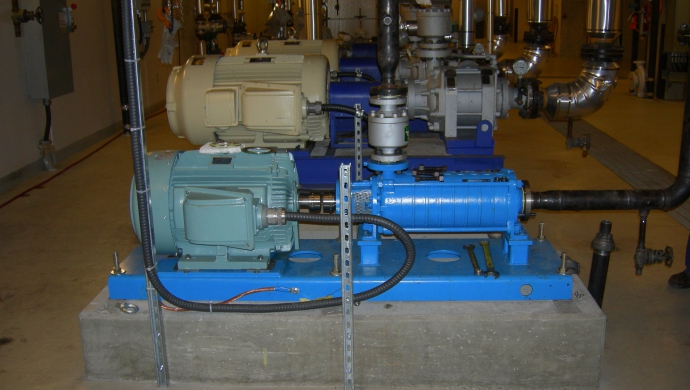 As part of several BC Hydro Power Smart supported projects, E-Factor has designed and managed the installation of a new 75 HP feedwater pump to use under lower load periods. Piping system was designed for registration with BC Safety Authority for high pressure piping system to operate at pressure to 1,000 PSI.

The new pump was designed to operate more than six months per year, when campus steam load is lower than 45,000 lbs/hr (PPH). The plant currently operates using 200 horsepower pumps and is required to by-pass most of the feedwater in order to run the large pumps. At the design conditions (below 45,000 PPH) the pump and modified control strategy is able to reduce electrical usage by over 250,000 kWh.

Additional savings are also identified by reducing the pump discharge pressure which was set at 600 psi (200 psi above the steam supply pressure). A trial of this reduced pressure setting indicated an added 5% or 30,000 kWh can be saved by dropping to 500 psi discharge pressure. This control optimization has been proposed as part of a new project that will be completed in 2014.

Many Thanks to Rob Moysychyn, power engineer at VGH without whose help this pump project would have been impossible to implement or maintain.   Also thanks to VCHA, BC Hydro, and Lockerbie and Hole, for all their efforts.